To stop using narcotics, individuals must first allow their body to detoxify (detox) from the drug. Suddenly stopping or reducing the use of narcotics — especially after regular, high-dose use — shocks the brain and body. Withdrawal symptoms occur from this sudden rebound from drug use.

Many people with an addiction to narcotics want to address the addiction, but the fear of withdrawal is a major barrier to recovery, and that withdrawal fear may keep them from trying.

Fortunately, withdrawal from narcotics is not as bad as some people believe it will be. To make the process go as smoothly as possible, it is important to know the facts about narcotics withdrawal and detox.

What is Narcotics Withdrawal?

Narcotics are psychoactive chemicals that penetrate the brain’s protective blood-brain barrier and change the chemical composition of the brain. The affected brain chemicals (neurotransmitters) are responsible for how the brain functions, so the narcotic–induced alterations disrupt the brain’s normal ability to think and behave.

The brain tries to compensate for the effects of narcotics by making major changes in its chemical processes. Over time, as the brain is subjected to repeated use of narcotics, the compensatory changes become the brain’s new normal.

Narcotic withdrawal occurs because the sudden cessation of exposure to narcotics once again disrupts the brain’s chemistry, and the brain is shocked into trying to normalize itself once again. Until this normalization occurs, brain and body functions become disrupted and withdrawal symptoms result.

Signs and Symptoms of Narcotics Withdrawal

The most substantial narcotics withdrawal symptoms occur in the acute phase, which is the period immediately following discontinuation or reduction of the drug use. However, symptoms may persist for some time after the acute phase.

The narcotics withdrawal timeline is generally similar for most people, but there are some individual factors that may cause differences between individuals regarding the severity and duration of symptoms. These factors include :

For most people, acute withdrawal symptoms taper off and end after 4 to 10 days, depending on individual factors and the half-life of the specific narcotic being detoxed.

Short-term symptoms are those that occur during the acute withdrawal phase. They are mostly dominated by the physical symptoms of narcotics withdrawal, including:

Although the physical symptoms predominate, some psychological symptoms are often present during the acute phase, especially:

Following the acute withdrawal period, longer-term, protracted withdrawal symptoms may emerge and may last weeks or months from the last drug use. These tend to be primarily psychological and may include:

The psychological symptoms are an especially potent cause of experiencing a setback in sobriety. These symptoms and their underlying causes are directly addressed by addiction treatment programs.

Managing or averting narcotic withdrawal symptoms is the function of medically assisted detox. This process involves the use of medical support — with or without the use of supportive medications — to help people get through the detox and withdrawal period safely, comfortably and with minimal shock to their brain and body.

Medically assisted detox provides the option of using narcotic replacement therapy to prevent or reduce withdrawal. It also provides a number of other significant advantages for helping people through the otherwise difficult barrier of withdrawal and getting a good start on successful recovery:

By attending a medical detox program, individuals are able to demonstrate to loved ones that they are serious about recovery.

Some people attempt to self-detox at home by tapering. However, tapering is usually problematic since the ability to self-taper from drugs is difficult. Self-detoxing off narcotics at home may not provide the best opportunity for success, as the drug cravings and desire to alleviate the withdrawal symptoms may be overwhelming.

Outpatient detox treatment is a good option for some people. Outpatient detox requires attendance at a detox center for medication and symptom management and to attend meetings and counseling sessions. Outpatient offers more flexibility than inpatient treatment does, but people should consult with a medical professional to understand what will likely be the best fit for them.

People who plan to detox at home should have certain supporting factors in place:

Most people will have the very best opportunity for success by attending an inpatient narcotics detox program.

Narcotics detox is the medically-supervised withdrawal from the drugs for optimal safety and comfort. It should be remembered that detox does not count as a full treatment for narcotics addiction; recovery from drug use takes much more than simply abstaining from drug use. A return to good health requires addressing the reasons behind the substance use along with properly healing from the mental and physical damage caused by the drug use.

The narcotics detox process begins with a medical assessment to assess each individual’s specific needs so that these can be properly addressed in the detox process.

Next, the detox begins. Each individual can decide on the use of medication-assisted treatment or other approaches to help the detox process. The focus here is to soften the impact of withdrawal from the drug on the brain and body and to promote stabilization in a drug-free state. The length of time in detox is usually 5 to 10 days for most individuals.

The detox process includes treatment and recovery planning for after the detox is complete.

Medically assisted detox at an accredited facility is the safest and most effective way to cleanse the body of narcotics and transition smoothly into treatment and recovery. Detoxing allows the brain and body to properly ease from the drug use back to normal health and function without the shock of sudden withdrawal.

If you or a loved one are ready to address a narcotics addiction, contact The Recovery Village Palm Beach at Baptist Health to speak with a representative about how detoxing at a professional treatment center sets the foundation for a healthy life. Take the first step toward that healthier future, call today. 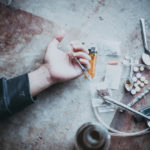