Dementia involves severe cognitive (intellectual) impairment that interferes with the individual’s ability to perform their daily activities. These cognitive impairments include memory loss and difficulties with thinking, planning, reasoning, and language. Dementia is caused by damage to neurons in the brain and may be caused by a variety of disorders. Alcohol addiction or excessive intake of alcohol over a prolonged period of time can also cause damage to neurons and cause or increase the risk of dementia. Alcohol addiction may cause dementia due to the direct effects of alcohol on the brain or due to indirect effects that are mediated through the effects of alcohol on other organ systems.

Alcohol-induced dementia refers to severe cognitive impairment caused by damage to neurons in the brain due to the direct or indirect effects of chronic alcohol use. Prolonged alcohol use can have direct neurotoxic effects resulting in cognitive impairment and dementia. Long-term use of excessive amounts of alcohol is associated with the loss of white matter in the prefrontal cortex (cognition) and cerebellum (motor coordination). White matter includes the axons that are responsible for the transmission of information between neurons.  Long-term use is also associated with the loss of gray matter or neurons in the frontal cortex, hypothalamus, and cerebellum. These changes are accompanied by concomitant changes in cognitive and motor function.

Cognitive impairment caused by the direct neurotoxic effects of alcohol may be referred to as primary alcohol-induced dementia. Alcohol can also impact nutrition or other organ systems and indirectly cause brain damage. Chronic Vitamin B1 deficiency and liver damage caused by prolonged intake of excessive amounts of alcohol can cause brain damage and lead to dementia. Similarly, excessive alcohol intake is associated with a variety of cardiovascular conditions that can cause brain hemorrhage or ischemia (blockage of blood vessels resulting in obstruction of supply of nutrients and oxygen to brain cells). Severe cognitive impairment resulting from neuronal death caused by brain hemorrhage and ischemia is referred to as vascular dementia.

Alzheimer’s disease is the most common form of dementia and is characterized by the formation of plaques of the amyloid protein in the brain. These plaques interfere with the neuronal transmission and cause deficits in cognitive functioning. Light alcohol intake is associated with a reduced chance of dementia, whereas heavy alcohol intake is linked with a higher risk of developing dementia. However, epidemiological studies conducted investigating the association between Alzheimer’s disease and alcohol intake have found little evidence to support such a relationship. Recent studies do suggest though, that alcohol may interfere with the removal of amyloid plaques and may contribute to the development of Alzheimer’s disease.

Wernicke-Korsakoff Syndrome consists of two different conditions that often occur together- Wernicke’s encephalopathy and Korsakoff’s psychosis. Wernicke’s encephalopathy is caused by acute thiamine deficiency and progresses to Korsakoff’s psychosis in the absence of treatment with thiamine. Chronic alcohol use is the leading cause of Wernicke-Korsakoff Syndrome in the developed world. Alcohol interferes with the absorption of thiamine or vitamin B1 by the gastrointestinal tissue and the utilization by various tissues in the body. Vitamin B1 is not synthesized by the body and hence must be acquired through diet. Chronic alcohol use is also associated with poor nutrition and may lead to thiamine deficiency. Thiamine or vitamin B1 plays an important role in all tissues in the body, including the brain. Thiamine is involved in many important biochemical reactions in the body and plays an important role in the breakdown of glucose in the brain. Thiamine is also involved in the synthesis of neurotransmitters and protects the brain from oxidative stress. Acute thiamine deficiency disrupts the functioning of neurons in the brain and leads to Wernicke’s encephalopathy which is a short-lived and severe condition.

Wernicke’s encephalopathy is characterized by symptoms involving paralysis of nerves that control eye movements, altered mental state involving confusion, and impaired muscle coordination (ataxia). If untreated, Wernicke’s encephalopathy may result in Korsakoff’s psychosis which is a long-lasting and debilitating condition. Korsakoff’s psychosis is characterized by an inability to form new memories, difficulty retrieving existing memories, hallucinations and making up stories (confabulation). Once the disease has progressed to the stage of Korsakoff’s psychosis, most individuals show some degree of permanent deficits in learning and memory. Other symptoms such as impaired motor coordination may show at least partial improvement if not complete recovery after treatment

Various forms of dementia, including Alzheimer’s disease, is characterized by a progressive decline in cognitive abilities. Unlike other forms of dementia, alcohol-induced dementia does not result in further deterioration of cognitive function upon abstinence. Some of the cognitive deficits involving attention, visuospatial abilities and executive functioning may even be reversible upon the maintenance of abstinence. This reversal of cognitive decline tends to be gradual and may occur over many years of maintaining abstinence.

Contact The Recovery Village Palm Beach at Baptist Health to speak with a representative about how professional addiction treatment can help. Take the first step toward a healthier future, call today. 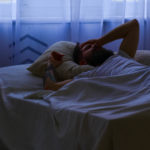